skip to main | skip to sidebar

It's here ! the 30 year time mark of my studio. Where I started making and recording sounds in Dec '79.
Well, even in the best and most memorable of times, things seemed fairly drab and matter of fact. My guess is all the "golden" eras were a good bit more tarnished, for those who lived them. 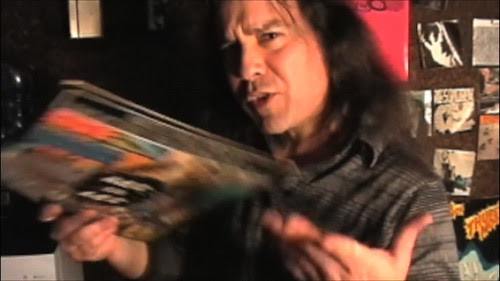 Me, with John Zorn cover in hand. Sonic Youth’s Death Valley ’69 pokin out in the back

30 seems like one of those unfathomably big numbers for the anniversary of my recording music, in one location.
I’ll try to stay clear from any “what a long strange trip it’s been” type stuff. I feel I mainly want to make a mundane commentary about life – a commentary about the basic, mundanity of life.
Thankfully plenty of people, including me, can view my 30 years through rose colored glasses. But there was the mind-numbing boringness in between the standout records, and in fact sometimes *during* the standout records. The overwhelming magic was really there 1.5% of the time. An analogy would be touring, which I’ve done more of lately, and thankfully. You play 45min’s sets, of which 1 in 5 is magical, and then it’s welcome back to the nothing-to-somewhat-something, of moment to moment life. I don’t want to be a big stick-in-the-mud and ungrateful sour puss, but I look back on -let me take a stab here- 5 or 6 very ground breaking records, and maybe 40 moderately so, and what I remember is that even the scenes surrounding the music, were much more underwhelming than the collective memory seems to make them.
When I was very young -barely over 20- what seemed most exciting, was that my immediate peers and I were seemingly doing something important. The broader scene (downtown New York in the 80′s/No Wave/post punk) seemed 88% mediocre and tiresome. But I am very happy that that era in New York has taken on a golden mantle. I’m grateful for some people’s rose-colored view of that era, cause it has slightly enhanced my own memory. It’s like when you show a visitor around town, and everything feels more interesting cause you share their viewpoint.
One main thing I can say is that these 30 years seem to encompass a golden era in independent recording – from when it started to be more affordable and democratic, to now, when recording is extremely accessible and common, and concerns about quality are at a minimum
Speaking of rose-colored glasses. Tom Antona from Alice Donut (a band I first recorded 17 years ago), wove a tale from stage the other night of fishing with me (“a young Martin Bisi”) back in the day, at a polluted canal near the studio, and how we’d catch “magical”, mutant fish with mutant butterflies flying around us – not exactly how I remember it, but a version I’d like to hang onto
Well, if you want to stroll down memory lane with me, you can watch this video of when I took all the records down from the studio wall recently. The reasons for me doing it are complex, but I place each cover in a basket and “reminisce”. They include indie stuff like Sonic Youth, Swans and Dresden Dolls, avant garde and World like John Zorn and Bill Laswell, and more mainstream records like Ramones, Iggy Pop and Herbie Hancock.

This is part 1 of  5, but you can easily find the other segments:

Easily I to but I about the post should have more info then it has.